The movie “Hoosiers” is a classic David and Goliath story, where the underdog whoops the giant. In this case, it was a small town high school basketball team that prevailed because it was thoroughly grounded in the fundamentals and each member trusted the others.  The result, Indiana’s David slayed Indiana’s giant! Success stories like this are even more special when superior team chemistry is built on top of superior talent! This doesn’t happen without superior leadership. The amazing story of John Wooden comes to mind.  I wonder how often it happens outside of athletics.

Let me tell another, less-known story, the legend of Betty Dunne: teacher, director, talent scout, musician, mentor, and coach. Miss Dunne, “Ma” as she was often called, was in charge of the vocal music program at Preble High School in Green Bay, Wisconsin for many years. She was the CEO in charge of Concert Choir, Senior Girls Glee Club, Senior Chorus, Madrigal, Sophomore Mixed Chorus, Sophomore Girls Chorus, Swing Choir, and countless soloists and small ensembles. It’s amazing that “Ma” didn’t work herself to death.

The 1975/76 school year had a talent pool as deep as it had ever been. Of the Swing Choir’s 27 members, 20 were seniors — only one was a sophomore. With such demand to be part of this popular group, Swing Choir was perhaps the most exclusive group in the school. But, it wasn’t a clique. Miss Dunne didn’t create snooty clubs. She built superior teams by recruiting the right people and forming a culture of cooperation and a sense of family. She created ensembles, both musically and in the interpersonal sense.

That year, Preble was well-represented at the state music competition. Swing Choir earned a top rating as usual. It also won the St. Norbert College swing choir festival earning the right to appear on the evening concert with the St. Norbert swing choir. A road trip to Michigan’s Upper Peninsula, a night club gig, a guest appearance at a private school, and the biggest spring concert I’ve ever seen are some of my fondest memories of that year, not to ignore the great friendships we all enjoyed.

Miss Dunne has long since retired, but her legacy lives on. Today, Preble’s show choir, Center Stage, is on Parade Magazine’s list of top show choirs in the country. In fact Parade has named them one of the top 3.

The summer of 2010 a gathering of former Swing Choir members, representing classes that followed the 75/76, came together and celebrated. We were thrilled to have Miss Dunne, now in her late eighties, join us. What a treat to see her again over 30 years later and let her know how much we appreciate her contributions to our musical development and our lives. Tony, the only sophomore of the 75/76 group attended, too. I had to ask, because kids can be so cruel. It would have been easy for the lone sophomore to feel like the odd man out of a group top-heavy with upperclassmen. Instead, he said it was the best year he had in school. That’s family! That’s teamwork! That’s the legend and legacy of Betty Dunne, teambuilder. 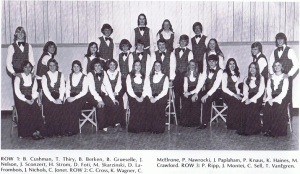 NOTE: Betty Dunne passed away October 2, 2012.  I will miss her, as will the hundreds of former students she inspired.

2 thoughts on “The Legend of Miss Dunne”