People of all ages mess up their futures in countless ways either knowingly or by willful ignorance.  The old adage, “What we don’t know won’t hurt us.” comes to mind. In any case, the outcome is a tragic waste through missed opportunities and falling short of one’s potential.

The book “Never Eat Alone” by Keith Ferrazzi reminds me of the countless lunches I had alone in my office sorting through email, listening to the radio, and playing video games. Sometimes I worked out at the gym, which is a good thing.  But, for 26 years few of those lunches were spent meeting new people and making professional connections.

“A recent IBM study found that each contact in a person’s network was worth $948.  In other words, that person you know with 100 more LinkedIn contacts than you could, on average, be worth $100,000 more per year! …  In an age when professional success belongs to the highly networked, a new blueprint is needed.” — Brian Tracy

#2: Too Much Talking, Not Enough Listening

At a business networking event in Cincinnati, a gathering of about 150 people was engaged in discussion framed by three questions posed by host, facilitator, and teacher Steve Browne.

As we settled in on Steve’s third question, some of the responses were negatively phrased as if they were responding to a different question, “How do people sabotage their networking efforts?”  One participant suggested that the agenda many people have is based on trying to make a good impression.  Instead, people need to concentrate more on being interested and less on being interesting. One is a form of caring, the second is annoying.

Too much talking results in collateral damage to relationship building, problem solving, and growth opportunities.  Sounds a little bit like a war zone.  If so, that would make disciplined and intentional listening a form of détente.

“I remind myself every morning: Nothing I say this day will teach me anything.
So if I’m going to learn, I must do it by listening.” — Larry King

#3: We Stymie Our Curiosity and Kill Our Creativity

Curious George was always getting into trouble.  I guess the little monkey didn’t know or didn’t care that “curiosity killed the cat.” Comedian Steven Wright once said, “Curiosity killed the cat, but for a while I was a suspect.” These perspectives suggest that curiosity is risky business. Maybe it’s true but, without a healthy measure of curiosity, where would creativity come from? Curiosity is the seed of creativity.

Stimulating creativity is not difficult.  Just break a few patterns.  Take a different way to work and listen to a different radio station.  Eat dinner at a different time and order something different from the menu.  Talk to someone on an elevator.  Get up 30 minutes earlier and read a book. Learn a new word and use it in conversation. Attend a workshop.  Call a friend you haven’t recently seen.  Add something to this list that your friends would think is strange.  Then do it!

TIME OUT:  It’s common for human beings to blame their situations on external causes.  The truth is, whether or not we caused our circumstances, we bear responsibility.  So, here are my questions for you to ponder: “When and how have I accidentally or otherwise sabotaged my career?  How will I make the correction?”

#4: We’re Sloppy About Our Integrity

“Integrity is the integration of inner virtuous values with outward virtuous behaviors.”

How significant is integrity?  Pick up any study or survey about the most important qualities of a leader and you’re sure to find integrity at or near the top.  Ask any person what qualities they value most in others and integrity is likely to be high on that list, too.  People value integrity in others even when they don’t live up to it themselves.

Human frailty makes it challenging to act in accordance with one’s complex and sometimes conflicting beliefs.  The tendency is to look for an escape with phrases like, “just this once” or “it’s such a small thing” or “I’ll just apologize when it’s over.”  But, true integrity is a strong personal obedience to one’s conscience (internal) and one’s accountability partners (external).

#5: Seeing Ourselves From a Devalued Perspective

If you have “assistant” in your job title, forget it.  There’s nothing wrong or inaccurate about the word.  It’s just that we’ve been conditioned to believe that assistant means a second-class position.

NBA Hall of Fame basketball player John Havlicek established himself as a superstar long before he was awarded a spot in the 5-man starting line-up with the Boston Celtics.  He was so good at coming off the bench, that he proudly kept that role, wearing the title of “Sixth Man” for about seven years even after he had earned the right to be a starter.  Havlicek was the all-time best assistant in professional basketball.

Celtics’ Coach Red Auerbach described Havlicek as the “guts of the team.”  How could this be?  He wasn’t even a starter for 40% of his career.  Because great coaches understand the importance and value of a great cast of assistants.

Havlicek quietly led by example, always ready to enter the game.  He had a tireless work ethic with tremendous endurance.  His passion for the game and the team never wavered.  Havlicek was versatile, able to play more than one position.  The Sixth Man seemed to be everywhere on the court!  He demonstrated his loyalty by playing his entire pro career with one team.  In 1996, John J. Havlicek was named to the top 50 NBA players of all time.  Not bad for an “assistant!”

“It is your attitude, not your aptitude, that determines your altitude.” — Zig Ziglar

If you are an assistant and see your role as anything less than crucial to the success of your organization, you have a perception problem not a position problem.  When your perception devalues the true importance of your role, you have the wrong attitude and are responsible for sabotaging your career.  Instead, ignore your title.  Focus on the true meaning and significance of the word “assistant”.  Until you become a starter, find ways to become the best you can be by assisting others to be the best they can be.  That’s the true attitude of a “Sixth Man.”

It’s life’s unsuccessful people that learn and grow only when they have to and often when it’s too late.  A professional baseball player doesn’t just submit a resume for the World Series.  He is constantly learning the game, working out, practicing the fundamentals and gaining new experience at every level.  People in all walks of life earn the privilege of playing in their industry’s “World Series” only when they pay their dues with real preparation.

While most folks are willing to prepare as a response, it’s successful people who consistently, intentionally, strategically and proactively prepare.  Is that kind of preparation your approach?

“By failing to prepare, you are preparing to fail.” — Benjamin Franklin

Enlightenment—We don’t know what we don’t know. It’s the discipline of passing from ignorance to awareness and from awareness to understanding.

Engagement—You can reject the knowledge or you can file it away for the future.  The habit of successful people is to apply it!

“You don’t know how much artists go through to make it look so easy.
It’s all in the practice.”  — Lauryn Hill

Empowerment—The greatest value is not gaining knowledge and experience.  It’s the conviction of an empowered person that emerges during the process.  Each cycle increases growth and empowerment!

In a rapidly-changing world, success comes to those who have a hunger to grow even when there is no apparent urgency.  People who learn only when they have to are sabotaging their futures.  Don’t let that be YOU!

P.S.  Our mission is to help today’s youth and young adults prepare for a future of excellence and honor by way of a development program that prepares them in five areas: Performance, Professionalism, Relationships, Leadership and Faith.  To learn how you can have a role, visit:  MoEaH.org

What’s right and what’s wrong does not change just because some people cheat and don’t get caught.

Manners don’t become unnecessary just because some people are impolite.

The laws of leadership, the ones that once built great leaders, have not changed just because bad leaders manipulate and bully their way to power.

Just because collective knowledge grows exponentially doesn’t automatically make any person today one bit smarter than the ancient Greeks, Romans or Hebrews.  We all start at zero and grow according to our intellectual capacity and effort (and we know not everyone puts in the effort.)

Just because we have more opportunities than ever before doesn’t mean they are all worthy of our time, money or reputation.

Reality doesn’t change just because we give something a new name.

The Ten Commandments don’t become unconstitutional just because a few people are offended and 9 people in robes decided to reinterpret our Constitution.

People of Biblical times are not to be classified as stupid just because they didn’t have today’s technology.

One is not a bigot simply because he or she has different opinions about how to solve social issues.

The Bible is not to be considered useless just because it was written thousands of years ago.

What was once right does not become wrong just because pop culture says so.

However, the world does change for the worse just because too many people have become intellectually lazy, emotionally numb, physically sick and spiritually apathetic.

The physical and spiritual laws of the universe do not change just because.

Today’s message is short and sweet: “Success is the Reward of Good Habits.”  Here are five such habits that will transform your life…

“The fastest way to success is to replace bad habits with good habits.”
– Tom Ziglar 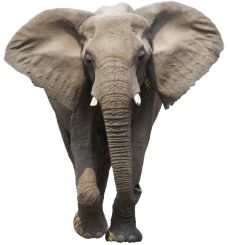 Take a phrase from the culture, change a word or two, and wrap it in a metaphor and you have a blog post.  Yesterday while I was writing I felt my brain nudging me toward a special message that would capture your imagination and everyone else’s. Knowing that we all have unique needs and desires, I wondered if the contents of any message could have 100% appeal to a diverse audience. As I thought carefully about it, I determined for myself this message could in fact be relevant to virtually everyone. Whether you agree or not, I believe it is so rock solid and has such great potential to change lives that everyone will want it. What’s not to like about that?

You would expect that something of this value would already be universally known and part of everyone’s life. Yet I would wager that within five minutes of observation we could discover that what seems obvious and valuable for mankind is not a dominant part of our culture. And as long as we remain in our private world we will fail to see the magnitude of this truth. Why? Because this problem is about something that is missing. It is more challenging to see what is absent than what is present. Like elephants, we seldom think about them until there is one in the room. Even then, some people miss it!

So what is this elephant that is not in the room for most people, much of the time?  The elephant is this: “Think strategically every day and plan accordingly.”  It’s as simple as that.  Whenever the elephant leaves the room one of two things happens. Either we don’t act when we should or we act poorly because we didn’t think first. Both are potentially dangerous! That’s why everyone needs an elephant like mine.

By the way, my friend Michael Ehrler has a name for his elephant: Strategic Time-Out Pause (aka S.T.O.P.)